When you have been wandering through the summer woods did you ever, like Trowbridge, sit down

“Beside the brook, irresolute,
And watch a little bird in suit
Of sombre olive, soft and brown,
Perched in the maple branches, mute?
With greenish gold its vest was fringed,
Its tiny cap was ebon-tinged,
With ivory pale its wings were barred,
And its dark eyes were tender starred.
‘Dear bird,’ I said, ‘what is thy name?’
And thrice the mournful answer came.
So faint and far, and yet so near—
‘Pewee! pe-wee! peer!'”

Doubtless this demure, gentle little cousin of the noisy, aggressive, crested flycatcher has no secret sorrow preying at its heart, but the tender pathos of its long-drawn notes would seem to indicate that it is rather melancholy. And it sings (in spite of the books which teach us that the flycatchers are “songless, perching birds”) from the time of its arrival from Central America in May until only the tireless indigo bunting and the red-eyed vireo are left in the choir in August.

But how suddenly its melancholy languor departs the instant an insect flies within sight! With a cheerful, sudden sally in mid-air, it snaps up the luscious bite, for it can be quite as active as any of the family. While not so ready to be neighbourly as the phoebe, the pewee condescends to visit our orchards and shade trees.

When nesting time comes, it looks for a partly decayed, lichen-covered branch, and on to this saddles a compact, exquisite cradle of fine grass, moss and shreds of bark, binding bits of lichen with spiders’ web to the outside until the sharpest of eyes are needed to tell the stuccoed nest from the limb it rests on. Only the tiny hummingbird, who also uses lichen as a protective and decorative device, conceals her nest so successfully. 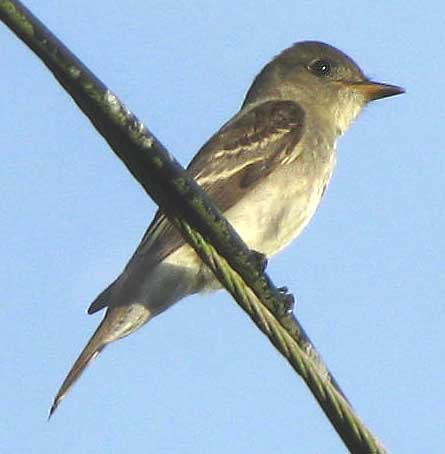