It is only when he is a baby that you could guess our robin is really a thrush, for then the dark speckles on his plump little yellowish-white breast are prominent thrush-like markings, which gradually fade, however, as he grows old enough to put on a brick-red vest like his father’s. 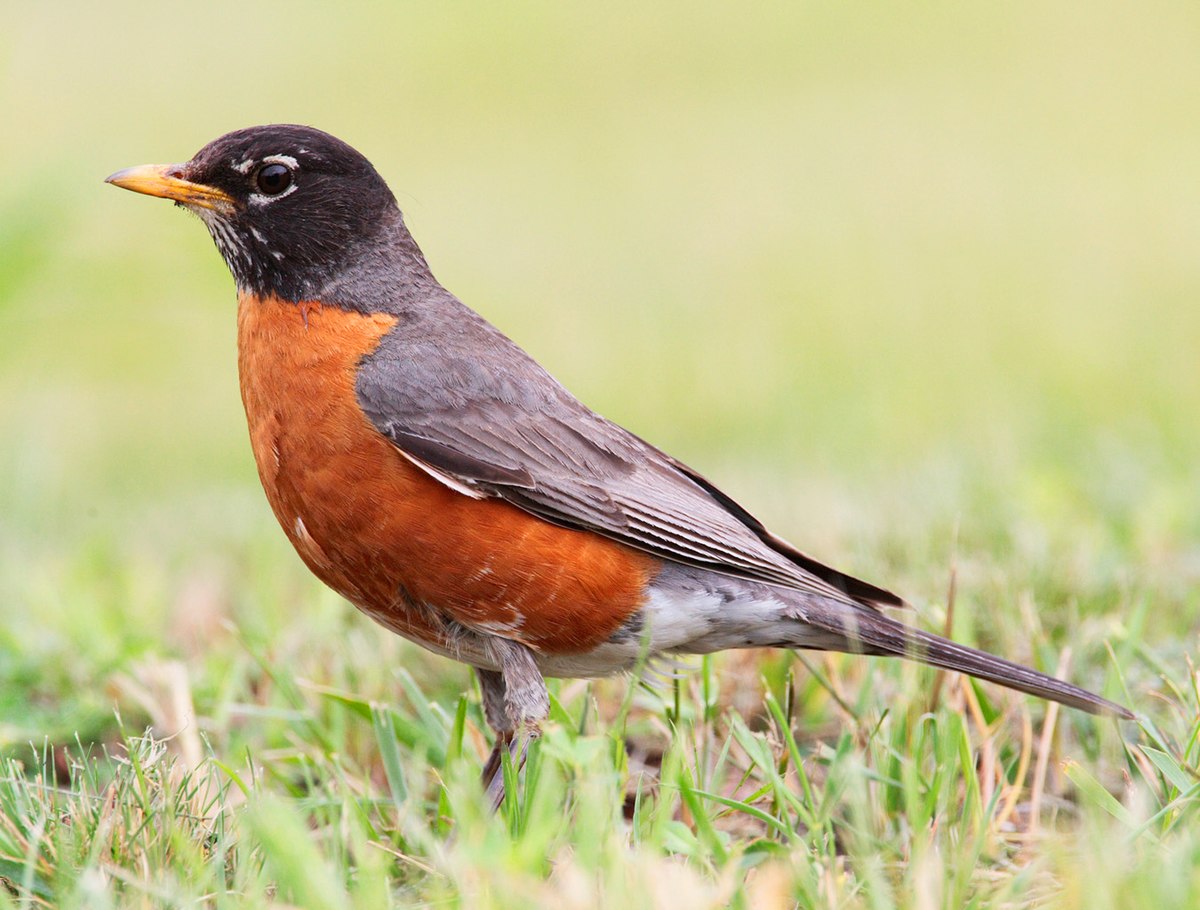 The European Cock Robin—a bird as familiar to you as our own, no doubt, because it was he who was killed by the Sparrow with the bow and arrow, you well remember, and it was he who covered the poor Babes in the Wood with leaves—is much smaller than our robin, even smaller than a sparrow, and he is not a thrush at all. But this hero of the story books has a red breast, and the English colonists, who settled this country, named our big, cheerful, lusty bird neighbour a robin, simply because his red breast reminded them of the wee little bird at home that they had loved when they were children.

When our American robin comes out of the turquoise blue egg that his devoted mother has warmed into life, he usually finds three or four baby brothers and sisters huddled within the grassy cradle. In April, both parents worked hard to prepare this home for them. Having brought coarse grasses, roots, and a few leaves or weed stalks for the foundation, and pellets of mud in their bills for the inner walls (which they cleverly managed to smooth into a bowl shape without a mason’s trowel), and fine grasses for the lining of the nest, they saddled it on to the limb of an old apple tree. Robins prefer low-branching orchard or shade trees near our homes to the tall, straight shafts of the forest. Some have the courage to build among the vines or under the shelter of our piazzas. I know a pair of robins that reared a brood in a little clipped bay tree in a tub next to a front door, where people passed in and out continually. Doubtless very many birds would be glad of the shelter of our comfortable homes for theirs if they could only trust us. Is it not a shame that they cannot? Robins, especially, need a roof over their heads. When they foolishly saddle their nest on to an exposed limb of a tree, the first heavy rain is likely to soften the mud walls, and wash apart the heavy, bulky structure, when

“Down tumble babies and cradle and all.”

It is wiser of them to fit the nest into the supporting crotch of a tree, as many do, and wisest to choose the top of a piazza pillar, where boys and girls and cats cannot climb to molest them, nor storms dissolve their mud-walled nursery. There are far too many tragedies of the nests after every heavy spring rain.

Suppose your appetite were so large that you were compelled to eat more than your weight of food every day, and suppose you had three or four brothers and sisters, just your own size, and just as ravenously hungry. These are the conditions in every normal robin family, so you can easily imagine how hard the father and mother birds must work to keep their fledglings’ crops filled. No wonder robins like to live near our homes where the enriched land contains many fat grubs, and the smooth lawns, that they run across so lightly, make hunting for earth worms comparatively easy. It is estimated that about fourteen feet of worms (if placed end to end) are drawn out of the ground daily by a pair of robins with a nestful of babies to feed. When one of the parents alights near its home, every child must have seen the little heads, with wide-stretched, yellow bills, pop up suddenly like Jacks-in-the-box. How rudely the greedy babies push and jostle one another to get the most dinner, and how noisily they clamour for it! Earth worms are the staff of life to them just as bread is to children, but robins destroy vast quantities of other worms and insects more injurious to the farmers’ crops, so that the strawberries and cherries they take in June should not be grudged them.

A man of science, who devoted many hours of study to learn the great variety of sounds made by common barnyard chickens in expressing their entire range of feeling, from the egg shell to the axe, could entertain an audience delightfully for an evening by imitating them. Similar study applied to robins would reveal as surprisingly rich results, but probably less funny. No bird that we have has so varied a repertoire as Robin Goodfellow, and I do not believe that any boy or girl alive could recognise him by every one of his calls and songs. His softly warbled salute to the sunrise differs from his lovely even-song just as widely as the rapturous melody of his courting days differs from the more subdued, tranquil love song to his brooding mate. Indignation, suspicion, fright, interrogation, peace of mind, hate, caution to take flight—these and a host of other thoughts, are expressed through his flexible voice.

“It is only when he is a baby that you could guess our robin is really a thrush.”

Toward the end of June, you may see robins flying in flocks after sun-down. Old males and young birds of the first brood scatter themselves over the country by day to pick up the best living they can, but at night they collect in large numbers at some favourite roosting place. Oftentimes the weary mother birds are now raising second broods. We like to believe that the fathers return from the roosts at sun-up to help supply those insatiable babies with worms throughout the long day.

After family cares are over for the year, robins moult, and then they hide, mope, and keep silent for awhile. But in September, in a suit of new feathers, they are feeling vigorous and cheerful again; and, gathering in friendly flocks, they roam about the woodland borders to feed on the dogwood, choke cherries, juniper berries, and other small fruits. You see they change their diet with the season. By dropping the undigested berry seeds far and wide, they plant great numbers of trees and shrubs as they travel. Birds help to make the earth beautiful. With them every day is Arbour Day.

It is a very dreary time when the last robin leaves us, and an exceptionally cold winter when a few stragglers from the south-bound flocks do not remain in some sheltered, sunny, woodland hollow.

This website uses cookies to improve your experience while you navigate through the website. Out of these, the cookies that are categorized as necessary are stored on your browser as they are essential for the working of basic functionalities of the website. We also use third-party cookies that help us analyze and understand how you use this website. These cookies will be stored in your browser only with your consent. You also have the option to opt-out of these cookies. But opting out of some of these cookies may affect your browsing experience.
Necessary Always Enabled
Necessary cookies are absolutely essential for the website to function properly. These cookies ensure basic functionalities and security features of the website, anonymously.
Functional
Functional cookies help to perform certain functionalities like sharing the content of the website on social media platforms, collect feedbacks, and other third-party features.
Performance
Performance cookies are used to understand and analyze the key performance indexes of the website which helps in delivering a better user experience for the visitors.
Analytics
Analytical cookies are used to understand how visitors interact with the website. These cookies help provide information on metrics the number of visitors, bounce rate, traffic source, etc.
Advertisement
Advertisement cookies are used to provide visitors with relevant ads and marketing campaigns. These cookies track visitors across websites and collect information to provide customized ads.
Others
Other uncategorized cookies are those that are being analyzed and have not been classified into a category as yet.
SAVE & ACCEPT
Loading Comments...