Bob-white and ruffed grouse are the fife and drum corps of the woods. That some birds are wonderful musicians everybody knows. No other orchestra contains a member who can drum without a drum.

Even that famous drummer, the woodpecker, needs a dead, dry, resonant, hardwood limb to tap on before he can produce his best effects. How does the grouse beat his deep, muffled, thump, thump, thumping, rolling tattoo? Some scientists have staked their reputation on the claim that they have seen him drum by rapidly striking his wings against the sides of his body; but other later-day scientists, who contend that he beats only the air when his wings vibrate so fast that the sight cannot quite follow them, are undoubtedly right.

On a fallen log, a stump, a rail fence or a wall, that may have been used as a drumming stand for many years, the male grouse will strut with a jerking, dandified gait, puff out his feathers, ruff his neck frills, raise and spread his fan-shaped tail like a turkey cock, blow out his cheeks and neck, then suddenly halt and begin to beat his wings. After a few slow, measured thumps, the stiff, strong wings whir faster and faster, until there is only a blur where they vibrate. This is the grouse’s love song that summons a mate to their trysting place. It serves also as a challenge to a rival. Blood and feathers may soon be strewn around the ground, for in the spring grouse will fight as fiercely as game-cocks. Sportsmen in the autumn woods often hear grouse drumming at the old stand, merely from excess of vigour and not because they take the slightest interest then in a mate. After the mating season is over, they have less chivalry than barnyard roosters.

Shy, wary birds of wooded, hilly country, grouse are rarely thought of as possible pets, but the gentle little girl in the picture won the heart of a drummer and subdued his wildness, as you see. Some people are trying to domesticate grouse in wire-enclosed poultry yards.

Sometimes when, like “the cat that walked by himself” you wander “in the wild wet woods,” perhaps you will be suddenly startled by the loud whirring roar of a big brown grouse that suddenly hurls itself from the ground near your feet. If it were shot from the mouth of a cannon it could surprise you no less. Then it sails away, dodging the trees and disappears. Gunners have “educated” the intelligent bird into being, perhaps, the most wily, difficult game in the woods.
Like the meadowlark, flicker, sparrows and other birds that spend much time on the ground, the bob-white and ruffed grouse wear brown feathers, streaked and barred, to harmonise perfectly with their surroundings. “To find a hen grouse with young is a memorable experience,” says Frank M. Chapman. “While the parent is giving us a lesson in mother love and bird intelligence, her downy chicks are teaching us facts in protective colouration and heredity. How the old one limps and flutters! She can barely drag herself along the ground. But while we are watching her, what has become of the ten or a dozen little yellow balls we had almost stepped on? Not a feather do we see, until, poking about in the leaves, we find one little chap hiding here and another squatting there, all perfectly still, and so like the leaves in colour as to be nearly invisible.” 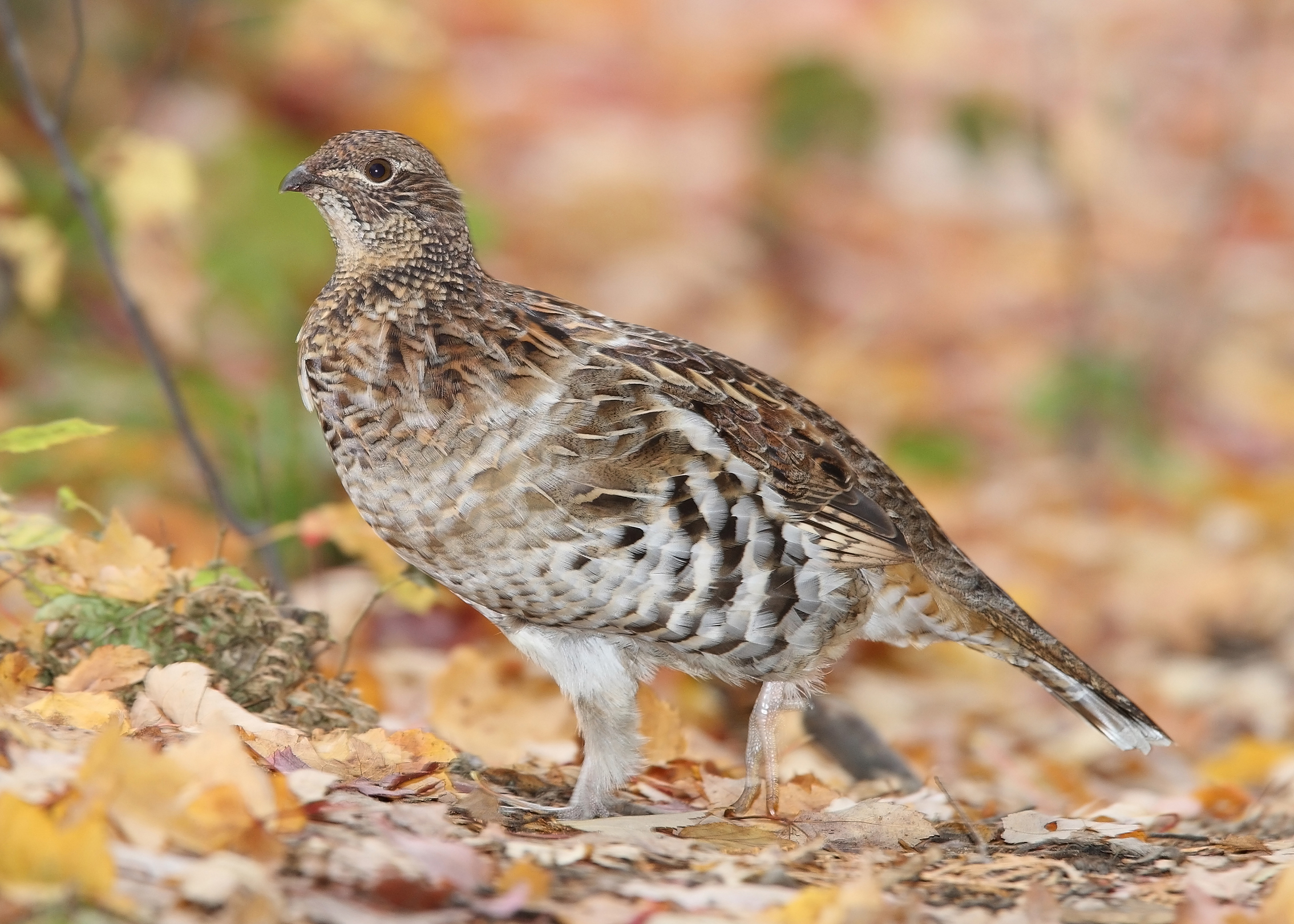