Among birds, as among humans, it is the father who lends his name to the family, however difficult it may be to know the mother and children by it.

Who that had not studied the books would recognise Mrs. Scarlet Tanager by her name? or Mrs. Purple Finch? or Mrs. Indigo Bunting? or Mrs. Rose-breasted Grosbeak?
The latter lady has not a rose-coloured feather on her. She is a streaked, brown bird, resembling an overgrown sparrow, with a thick, exaggerated finch bill and a conspicuous, white eyebrow. When her husband wears his winter clothes in the tropics, his feathers are said to be similar to hers, so that even his name, then, does not fit. But when he returns to the United States in May he is, in very truth, a rose-breasted grosbeak. His back is as black as a chewink’s; underneath he is grayish white, and a patch of lovely, brilliant, rose colour on his breast, with wing linings of the same shade, make him a splendidly handsome fellow. Perhaps before you get a glimpse of the feathers that are his best means of introduction, you may hear a thin eek call-note from some tree-top, or better still, listen to the sweet, pure, mellow, joyously warbled song, now loud and clear, now softly tender, that puts him in the first rank of our songsters.

Few birds so conspicuously dressed risk the safety of their nests either by singing or by being seen near it, but this gentle cavalier not only carries food to his brooding mate but actually takes his turn at sitting upon the pale-greenish, blue-speckled eggs. As a lover, husband, and father he is irreproachable.

A friend who reared four orphan grosbeaks says that they left the nest when about eleven days old. They were very tame, even affectionate toward him, hopping over his shoulders, head, knees, and hands without the least fear, and eating from his fingers. When only ten weeks old the little boy grosbeaks began to warble. On being released to pick up their own living in the garden, these pets repaid their foster-father by eating quantities of potato-bugs, among other pests. Some people call this grosbeak the potato-bug bird. 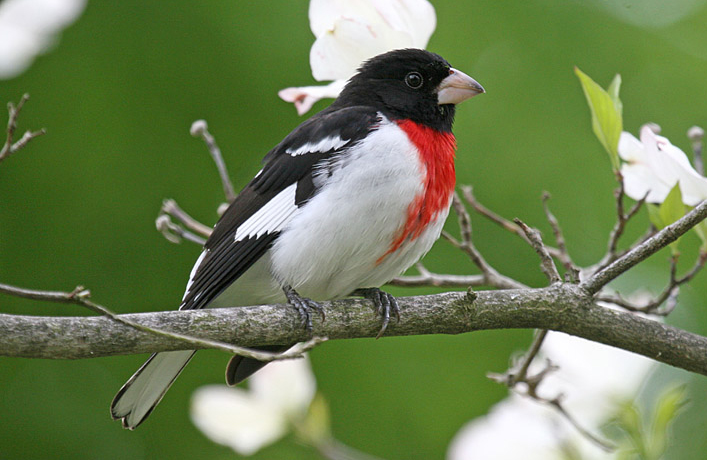