It is not often that you can get close enough to any bird to see the white of his eyes, but the brighter olive green of this vivacious little white his white breast, faintly washed with yellow on the sides, and the two yellowish white bars on his wings help you to recognise him at a distance. Imagine my surprise to meet him in Bermuda, over six hundred miles out at sea from the Carolina coast, where he, too, was taking a winter vacation! In those beautiful islands, where our familiar catbirds and cardinals also abound, the white-eyed vireo is the most common bird to be seen. His sweet, vigorous, irregular interrogation may be heard all day. But there he is known by quite a different name—”Chick of the Village.” It was a pleasant shock to hear, “Now, who are you, eh?” piquantly sung out at me, a stranger in the islands, by this old acquaintance in a hibiscus bush within a few steps of the pier where the steamer landed. 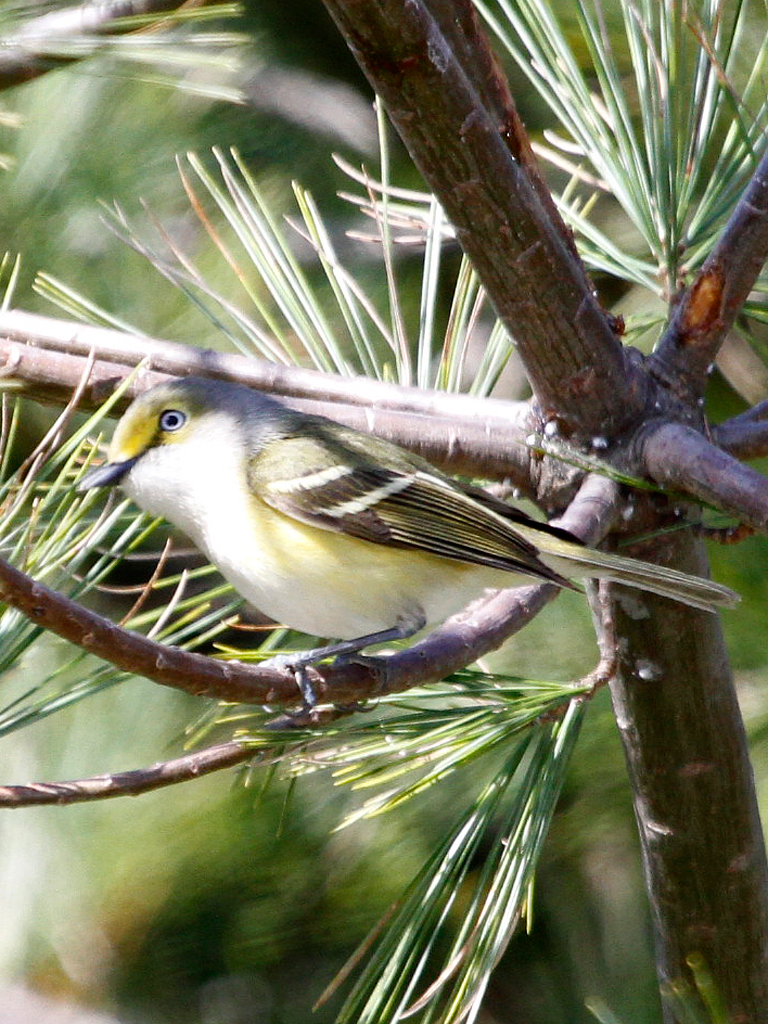 “WhiteEyedVireoMaine” by Needsmoreritalin – Own work. Licensed under CC BY 3.0 via Wikimedia Commons.

In the United States where he nests, his manners are less sociable; in fact they are rather pert, even churlish at times, and never very friendly. Here he loves to hide in such low, briery, bushy tangles as the chat and catbird choose. By no stretch of the imagination would his chic Bermuda name fit him here, for he has little to do with villages and he resents your advances toward more intimate acquaintance with harsh, cackling scoldings, half to himself, half to you, until you, in turn, resent his impertinence and leave him alone— just what the independent little fellow wanted. He has a strong, decided character, you perceive.

His precious nest, so jealously guarded, is a deeper cup than that of his cousin with the red eye, deeper than that of any of the other vireos, and it usually contains three favourite materials in addition to those generally chosen by them: they are bits of wood usually stolen from some woodpecker’s hole, shreds of paper, and yards and yards of fine caterpillar silk, by which the nest is hung from its slender fork in the thicket. It also contains, not infrequently, alas! a cowbird’s most unwelcome egg.