See him high in air in hot pursuit of that big, black, villainous crow, who dared try to rob his nest, darting about the rascal’s head and pecking at his eyes until he is glad to leave the neighbourhood!

There seems to be an eternal feud between them.

Even the marauding hawk, that strikes terror to every other feathered breast, will be driven off by the plucky little kingbird.

But surely a courageous home defender is no tyrant. A kingbird doesn’t like the scolding catbird for a neighbour, or the teasing blue jay, or the meddlesome English sparrow, but he simply gives them a wide berth.

He is no Don Quixote ready to fight from mere bravado. Tyrannus tyrannus is a libel. 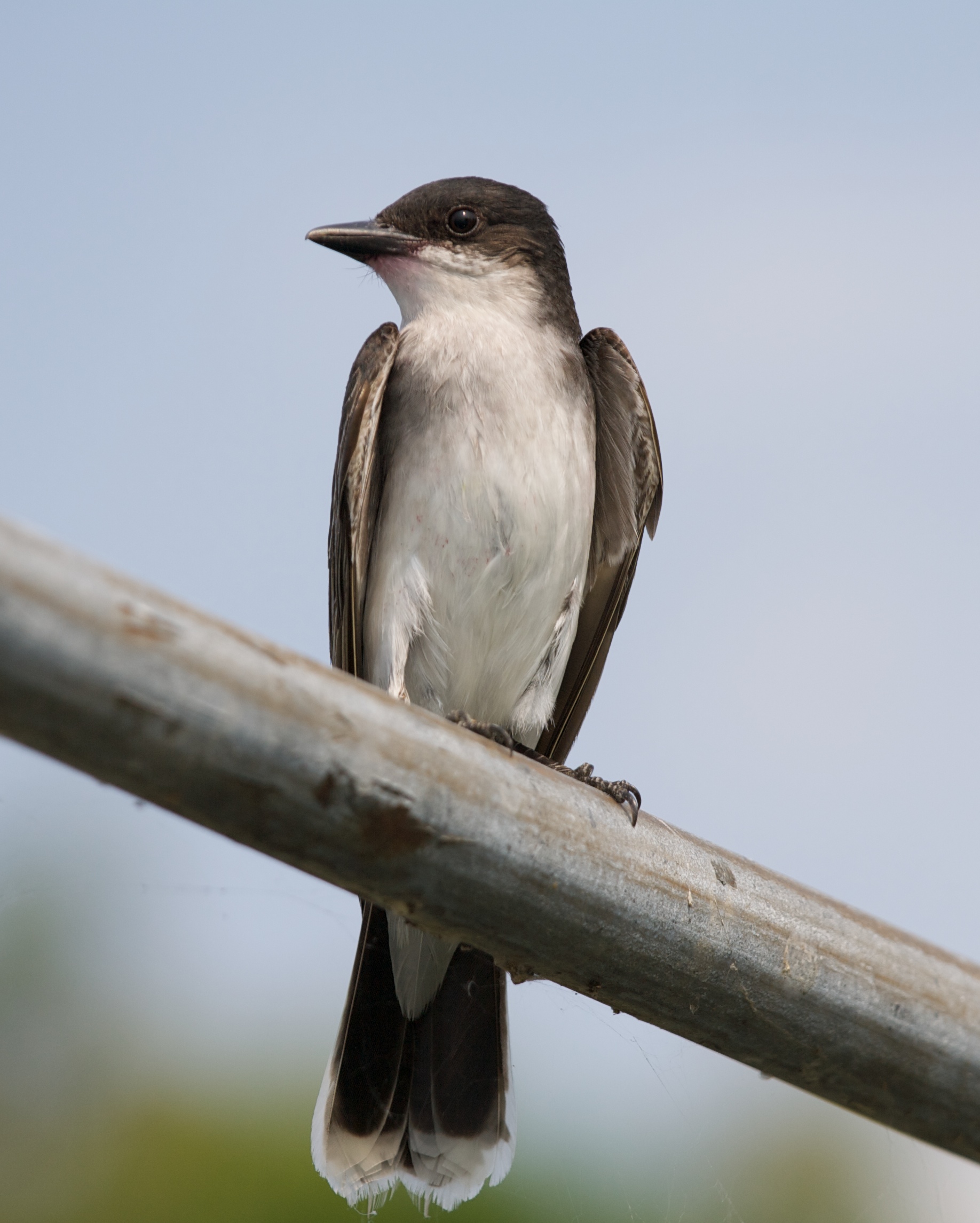 “Kingbird Profile” by Beezhive – Own work. Licensed under CC BY-SA 3.0 via Wikimedia Commons.

For years he has been called the bee martin and some scientific men in Washington determined to learn if that name, also, is deserved.

So they collected over two hundred kingbirds from different parts of the country, examined their stomachs and found bees—mostly drones—in only fourteen.

The bird is too keen sighted and clever to snap up knowingly a bee with a sting attached, you may be sure; but occasionally he makes a mistake when, don’t you believe, he is more sorry for it than the beekeeper?

He destroys so many robber flies—a pest of the hives—that the intelligent apiarist, who keeps bees in his orchard to fertilise the blossoms, always likes to see a pair of kingbirds nesting in one of his fruit trees.

The gardener welcomes the bird that eats rose chafers; the farmer approves of him because he catches the gadfly that torments his horses and cattle, as well as the grasshoppers, katydids and crickets that would destroy his field crops if left unchecked.

From a favourite lookout on a tall mullein stalk, a kingbird neighbour of mine would detect an insect over one hundred and seventy feet away, where no human eye could see it, dash off, snap it safely within his bill, flutter uncertainly an instant, then return to his perch ready to “loop the loop” again any moment.

The curved clasp at the tip of his bill and the stiff hairs at the base helped hold every insect his prisoner.

While waiting for food to fly into sight the watcher did a good deal of calling. His harsh, chattering note, ching, ching, which penetrated to a surprising distance, did not express alarm, but rather the exultant joy of victory.
He and his mate were certainly frantic with fear, however, when I climbed into their apple tree one June morning, determined to have a peep at the five creamy-white eggs, speckled with brown and pale lilac, that had just been laid in the nest in a crotch near the end of a stout limb.

Whirling and dashing about my head, the pair made me lose my balance, and I tumbled ten feet or more to the ground.

As the intruder fell, they might well have exclaimed—perhaps they did—”Sic semper tyrannis!”