You will see it alone or in small flocks walking about the pastures after the cattle; or, in the West, boldly perching upon their backs to feed upon the insect parasites—a pleasant visitor for the cows. So far, so good.

The male is a shining, greenish-black bird, smaller than a robin, with a coffee-brown head and neck. His morals are awful, for he makes violent love to any brownish-gray cowbird he fancies but mates with none. What should be his song is a squeaking kluck tse-e-e, squeezed out with difficulty, or a gurgle, like water being poured from a bottle. When he goes a-wooing, he behaves ridiculously, parading with spread wings and tail and acting as if he were violently nauseated in the presence of the lady. Fancy a cousin of the musical bobolink behaving so!

And nothing good can be said for the female cowbird. Shirking as she does every motherly duty, she sneaks about the woods and thickets, slyly watching her chance to lay an egg in the cradle of some other bird, since she never makes a nest of her own. Thus she scatters her prospective family throughout the neighbourhood. The yellow warbler, who is a famous sufferer from her visits, sometimes outwits her, as we have seen; but other warblers, less clever, the vireos, some sparrows, and, more rarely, woodpeckers, flycatchers, orioles, thrushes and wrens, seem to accept the unwelcome gift without a protest. If you were a bird so imposed upon, wouldn’t you peck holes in that egg, or roll it out of your nest, or build another cradle rather than hatch a big, greedy interloper that would smother and starve your own babies? Probably every cowbird you see has sacrificed the lives of at least part of a brood of valuable, insectivorous songsters. Without the least spark of gratitude in its cold heart, a young cowbird grafter forsakes its over-kind foster parents as soon as it can pick up its living and remains henceforth among its own kin—of whom only cows could think well. 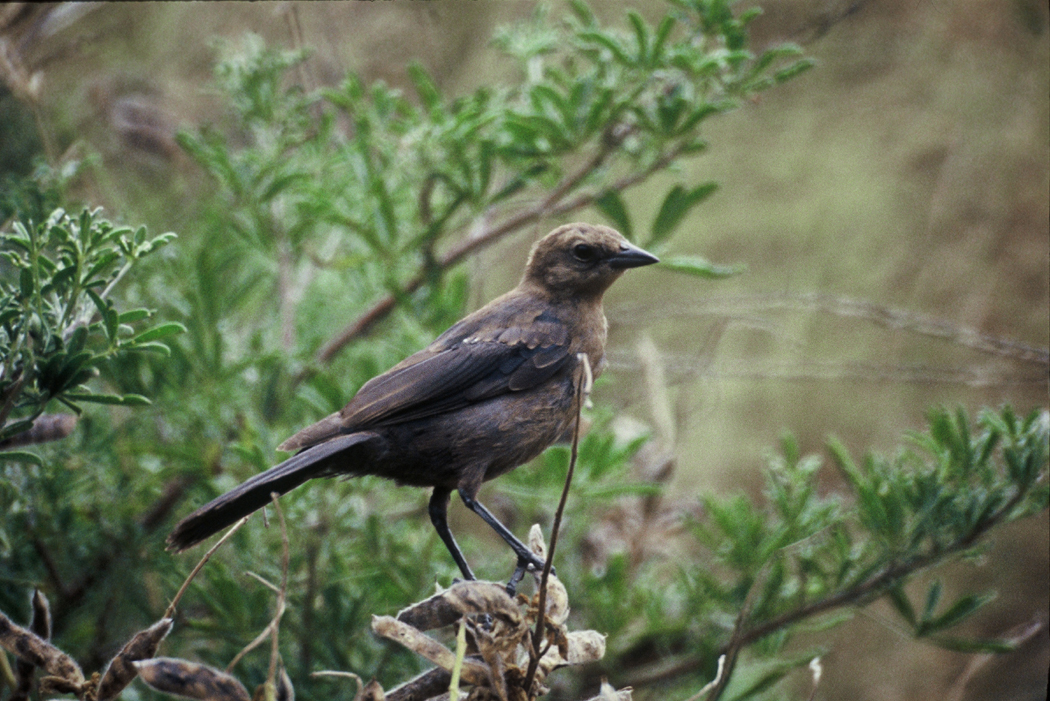 “Molothrus ater1” by Lee Karney, USFWS – Fish and Wildlife Service (Dead link: FWS no longer has this image on their site.). Licensed under Public Domain via Wikimedia Commons.