Perhaps you have seen a sand bank somewhere, probably near a river or pond, where the side of the bank was filled with holes as if a small cannon had been trained against it as a target.

In and out of the holes fly the smallest of the swallows, with no lovely metallic blue or glistening buff in their dull plumage, which is plain brownish gray above, white underneath, with a grayish band across the breast. Only their cousin, the rough-winged swallow, whose breast is brownish gray, is so plainly dressed. 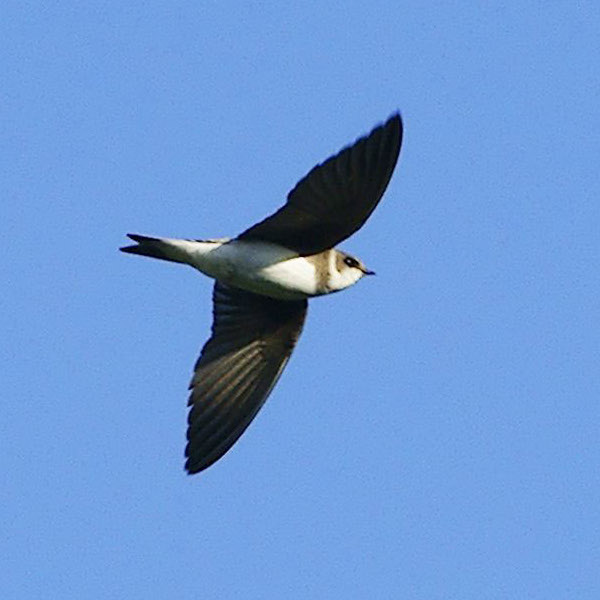 The giggling twitter of the bank swallows as they wheel and dart through the air above you, proves that they are never too busy hunting for a dinner to speak a cheerful word to their friends. Year after year a colony will return to a favourite bank, whose face has been honey-combed with such care. Think of the labour and patience required for so small a bird to dig a tunnel two feet deep, more or less! Some nests have been placed as far as four feet from the entrance. You are not surprised at the big kingfisher, who also tunnels a hole in a bank for his family, because his long, strong bill makes digging comparatively easy; but for the small-billed, weak-footed swallow, the work must be difficult indeed. What a pity they cannot hire moles to make the tunnels with their strong, flat, spade-like feet. No wonder the birds become attached to the tunnels that have cost so much labour. When there are no longer any baby swallows on the heaps of twigs, grass and feathers at the end of them, the birds use them as resting places by day as well as by night until it is time to gather in vast flocks and speed away to the tropics.