AMERICAN CROW. Two close relatives there are which, like the poor, are always with us;the crow and the blue jay. Both are mischievous rascals, extraordinarily clever, with the most highly developed brains that any of our birds possess.

Some men of science believe that, because of their brain power, they rightly belong at the head of the bird class where the thrushes now stand; but who wishes to see a family of songless rogues awarded the highest honours of the class Aves?

No bird is so well known to “every child,” so admired by artists, so hated by farmers, as the crow, who flaps his leisurely way above the cornfields with a caw for friend and foe alike, not caring the least for anyone’s opinion of him, good or bad. Perhaps he knows his own true worth better than the average farmer, who has persecuted him with bounty laws, shotgun, and poison for generations. The crow keeps no account of the immense numbers of grubs and larvae he picks up as he walks after the plough every spring, nor does the farmer, who nevertheless counts the corn stolen as fast as it is planted, and as fast as it ripens, you may be very sure, and puts a price on the robber’s head. Yet he knows that corn, dipped in tar before it is put in the ground, will be left alone to sprout. But who is clever enough to keep the crows out of the field in autumn?

How humiliated would humans feel if they realised what these knowing birds must think of us when we set up in our cornfields the absurd-looking scares they so calmly ignore! Some crows I know ate every kernel off every ear around the scare-crow in a neighbour’s field, but touched no stalk very far from it, as much as to say: “We take your dare along with your corn, Mr. Silly. If the ox that treadeth out his corn is entitled to his share of it, ought not we, who saved it from grasshoppers, cutworms, May beetles and other pests, be sharers in the profits?” Granted; but what about eating the farmer’s young chickens and turkeys as well as the eggs and babies of little song birds? At times, it must be admitted, the crow’s heart is certainly as dark as his feathers; he is as black as he is painted, but happily such cannibalism is apt to be rare. Strange that a bird so tenderly devoted to his own fledglings, should be so heartless to others’!

Toward the end of winter, you may see a pair of crows carrying sticks and trash to the top of some tall tree in the leafless woods, and there, in this bulky cradle, almost as bulky as a squirrel’s nest, they raise their family. Young crows may be easily tamed and they make interesting, but very mischievous pets. It is only when crows are nesting that they give up their social, flocking habit.

In winter, if the fields be lean, large picturesque flocks may be seen at dawn streaking across the sky to distant beaches where they feed on worms, refuse and small shellfish. More than one crow has been watched, rising in the air with a clam or a mussel in his claws, dropping it on a rock, then falling after it, as soon as the shell is smashed, to feast upon its contents. The fish crow, a distinct species, never found far inland, although not necessarily seen near water, may be distinguished from our common crow by its hoarser car. In some cases it joins its cousins on the beaches. With punctual regularity at sundown, the flocks straggle back inland to go to sleep, sometimes thousands of crows together in a single roost. Many birds have more regular meal hours and bed-time than some children seem to care for. Because crows eat almost anything they can find, and pick up a good living where other birds, more finical or less clever, would starve, they rarely need to migrate; but they are great rovers. There is not a day in the year when you could not find a crow. 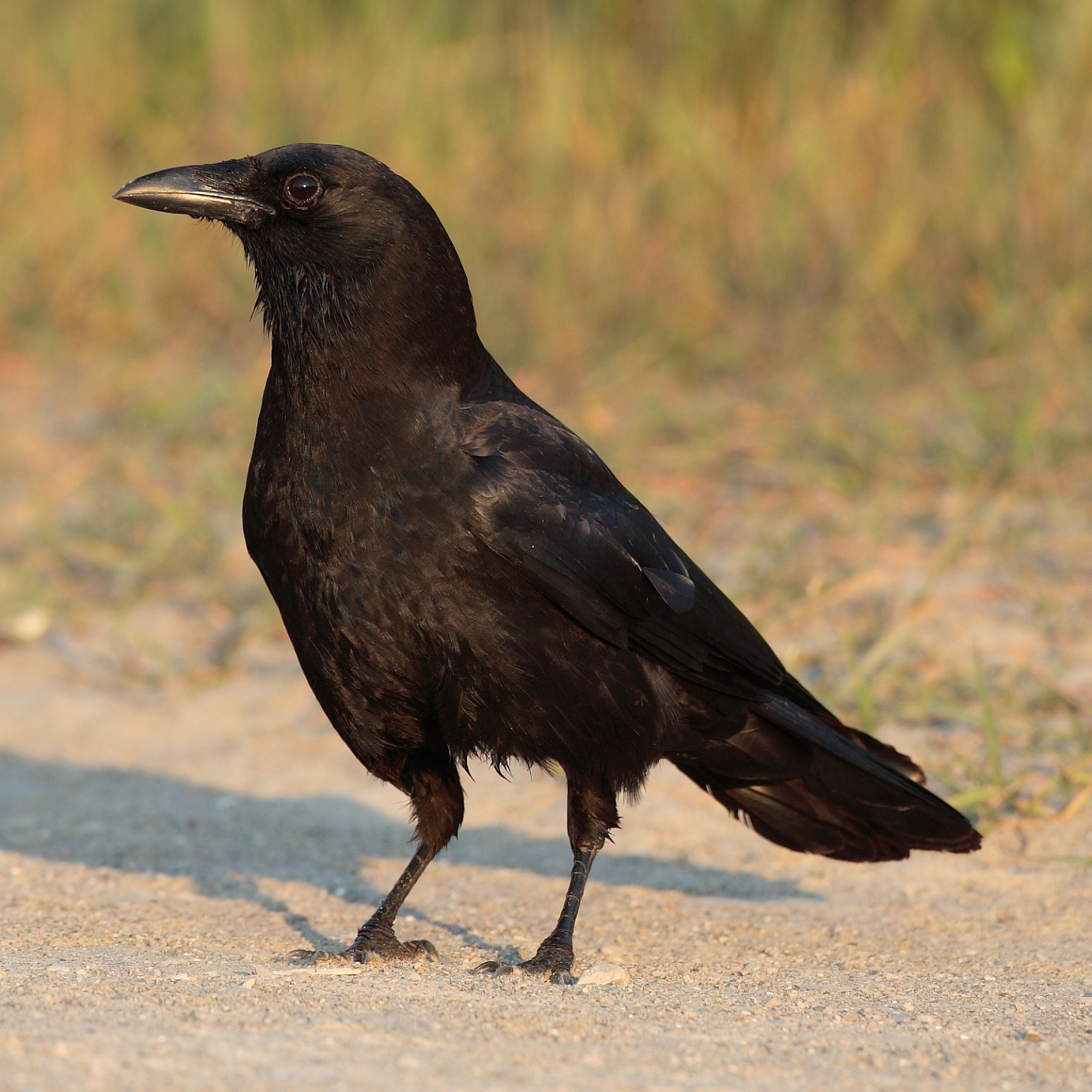